a studio visit with julie chang 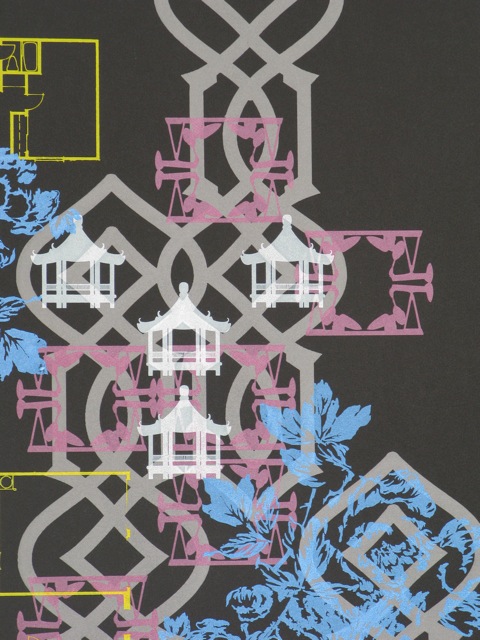 todd hosfelt:   language is really important in your work.   you’ve always had a visual vocabulary that you’ve worked from, but in this show, the titles also add to the meaning of the pieces.    first, will you tell me about the title of the show, “chinese, japanese, indian chief?”

julie chang:  it comes from the final line of a hand clapping game that we played when i was growing up in the 80’s in southern california.

i went to a chinese restaurant to

the waiter asked me what my name is

i know karate, punch em in the body,

you’d pull up at the corner of your eyes when you said “chinese”, then down on “japanese” and cross your arms in front of your body and nod your head for “indian chief.”  without understanding the implication or meaning, we were miming phrases and gestures as a way of belonging.    of course it also perpetuated racism…

j.c.: it seemed harmless.   but you know how the more innocuous something appears the more likely it is to kick you in the ass when you aren’t looking…    there are a lot of childhood games, stories and nursery rhymes that are really loaded with   paradoxes and inconsistencies.   they’re confusing when you’re a child and leave a bad taste when you remember them as an adult.

in my work i’m interested in exploring some of the contradictions inherent in the culture in which i was raised.   as the daughter of chinese immigrants,  i grew up with this constant feeling of cultural vertigo – living somewhere between east and west.   sometimes i still find myself feeling lost.   neither here nor there, both this and that, in and out…   my art looks at the struggle between belonging and alienation…    the difference between surface and substance.

th:  i think a lot of people grow up feeling like they don’t exactly fit in some way or another… 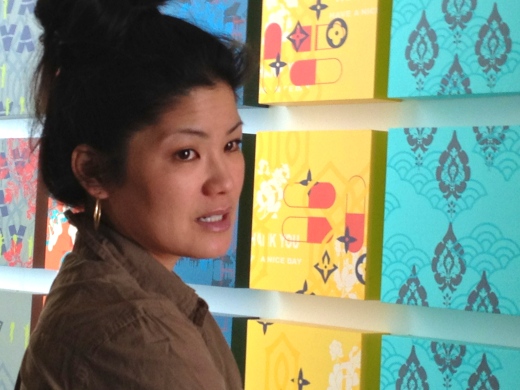 th:   the version of the rhyme i heard as a kid (20 years earlier and in the midwest) makes reference to breasts…    but your version is also pretty demeaning to women as well as being racist…

jc:  do you mean “dirty knees. look at these!”?    yes, it’s the unconscious and insidious that i find most interesting.  in this case, it’s mostly girls who play this game, unknowingly participating in a display of self-denegradation.

jc:  and to a certain extent we all feel like we’ve got to play along…

th:  how about the titles of the individual pieces?

jc:  a lot of them are inspired by the soundtrack of my childhood.  so “up, up and away” references aspiration, with a special nod to my father, who worked on the space shuttle program.  “nine ten do it again” could also have also been titled, “practice makes perfect” or “tiger mom” or “never good enough.”

“second shift” is a sociological term used to talk about gender inequality in domestic labor.   it’s the unpaid labor of a woman who works at a job outside the house all day, then comes home to cook and clean and take care of the kids.  it’s her second shift:  the kind of household i grew up in.

jc: i also think of it in the context of new immigrant or sexual labor.

jc:  there’s a lot of attention paid to undocumented immigrant labor.   equally controversial, yet less talked about is the prevalence of pornography and prostitution.   in both cases i see a group of people demonized for doing what they have to do to get by.  this is a big topic, so suffice it to say that it’s easier to blame the individual than the society that creates and sustains “the problem.” 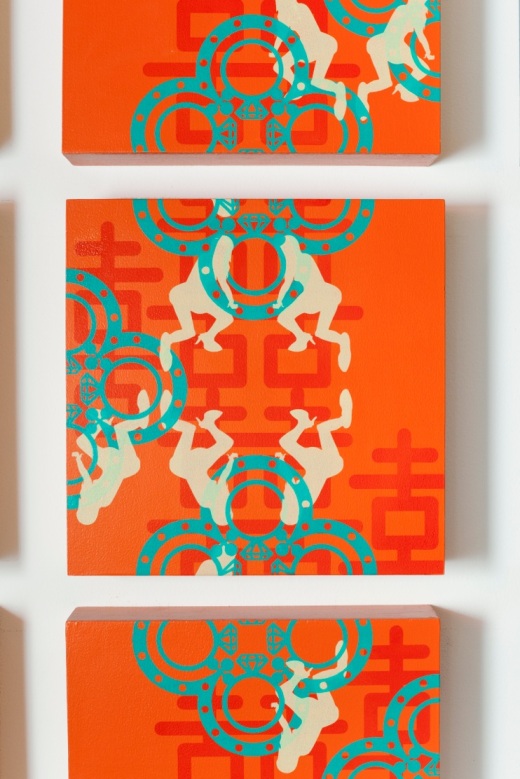 jc:  “happy endings” speaks to the fairy tale-perpetuated assumption of marriage as the ultimate goal for women.

th:   mmmmm.  i think it also refers to a sex act that’s the culmination of a massage…

jc:  yes.  double meanings are important in my work.  i’m using “happy ending” to refer to both the impossibility of a cinderella-like ending as well as the exoticization of asian women through the mail order bride and sex industries.

th:  there are images in your paintings that get doubled and abstracted or buried until they’re almost not available to the viewer except subliminally.   what are you hiding from us and why?

jc:  creating layers that shift from the foreground to background and from seen to unseen is inherent in my aesthetic.   it’s also at the conceptual foundation of my work, in that i’m always inviting the viewer to look deeper.   there’s very little in life that is as simple as it first appears…

th:  let’s talk about color…    the paintings look so “right” but when you start analyzing the individual colors, they seem like they ought never to be together…   you’re a really talented colorist.

jc:  thank you.  my use of color has been something i tend to take for granted, which is why, in this series, i set out to see how far i could push the limits of “right.”  it was touch and go until the very end, so as they say, “careful what you ask for.” 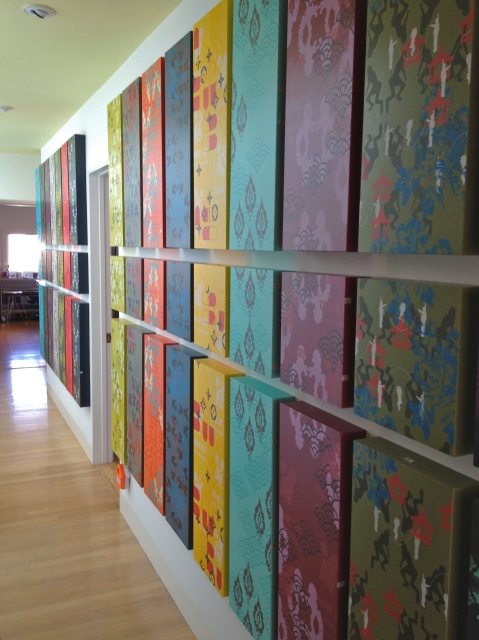 th:   where does your fascination with pattern and decoration come from?

jc:  as far back as i remember, i was aware of the perceived value that certain patterns, brands and symbols had over others and how that related to my own understanding of identity and value.

th:  are you a shelter magazine junkie?

th:  you’ve talked to me before about designers appropriating “exotic” cultural material.     do you want to say anything about that?

jc:  sure.  in the context of racial and feminist discourse, they talk about the “taking back” of language.   in a way, i’m experimenting with the same practice – and in both instances i think it’s somewhat treacherous territory.   that’s to say that i’m aware i walk a fine line between celebration and critique.

jc:  it’s big.   seriously.   even though i’m three to four years into working on this, it still feels like i was given a unicorn on my birthday.   imagine taking one of my paintings and applying it to 20,000 square feet of terrazzo.  the approach, look and feel will be very similar to my paintings, but the content will be more inspiring and uplifting and less critical and subversive. 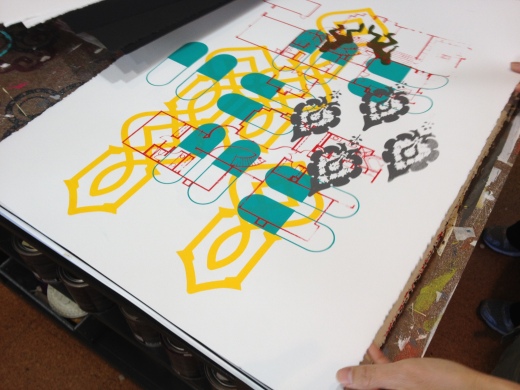 th:  tell me about the genesis of the works on paper.

jc:  originally they were just a solution to the problem of keeping my screens from drying before I was finished working with them.  i’d use paper to clear the ink after each pass on the panels.    they evolved into an experiment in color and compositional problem-solving.    paper is cheap and plentiful, so i could try things out without having to worry about the final outcome.

th:  the works on panel are so thought-through and so planned…    does it feel good to be working spontaneously on paper, or is it scary?

jc:  it feels great! there’s this permissiveness to the works on paper that has been missing in my practice.  i want to go even further, but for now i’m encouraged by my initial attempts.

th:  working on paper is physically / technically different than working on panel.    anything you want to say about that?

jc:  it’s a fast and furious and reactive process that relies on my ability to act instinctively.   there’s no time to over-think or doubt myself, which in and of itself is a huge relief. 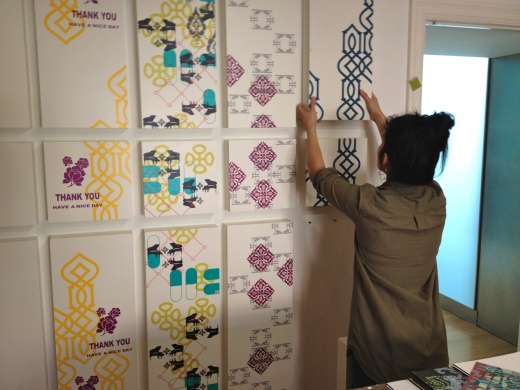 ← great legs
paella on the beach →

One thought on “a studio visit with julie chang”